Maize is subtropical plant that is grown for its carbohydrate nutrition value therefore because of its demand and being staple food for most communities, there is a greater need for the irrigation system for maize to make the plant available throughout the year.

Irrigation system for maize plant is very effective and possible since most maize plants are planted in rows that enables the movement of water supply pipes and irrigation equipment for watering maize.

The growth for maize plan is a critical plan that requires organized strategy and order to garner in more output hence it requires guidance which includes; 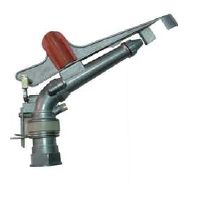 As discussed earlier, irrigation system for maize is majorly done by rain gun since most maize plantations cover longer distances hence the best irrigation method for the crop is done by impact rain gun.

This is because the most rain gun sprinklers operate at pressures of 40 psi to 120 psi which are considered to be high pressures.

These working conditions of the rain gun sprinklers enable the system to be adequately used as an irrigation system for maize plant.

The components are arranged linearly along the maize planting rows thus fastening the movement of irrigation equipment and the operators.

Rain gun sprinkler installation requires pipes of high operating nominal pressure of 8 bars and above. This is to avoid the rapture or breakages of the pipe.

Commonly pipes that are used for the rain gun installation posses the following characteristics:

Normally the rain gun sprinklers have inside threaded ends enabling them to be effectively joined or coupled with other reducing couplings to make it compatible to the main line.

On the installation and design of the rain gun, the irrigation designer must understand the working pressure and the flow rate of the gun, plant water requirement per irrigation cycle, type of the plant, climatic conditions and the topography or the slope of the farm.

Before adopting any new seed variety, it is important that farmers isolate a small portion of land, plant the variety and observe its characteristics.

Check if the variety is prone to lodging (falling due to wind) if the ears open early before maturity, which allows water and rotting, the yield and any other negative characteristic.

When you have established that the variety is good, proceed to large-scale production.  This advice is given to caution farmers against buying new seed varieties (which may not have the desired qualities) as may be claimed by seed companies or seed stockiest.

The common varieties for highland includes

Land preparation is a process that involves several activities which include, plowing, breaking and addition of important soil nutrients. The purpose of these activities is to improve crop/plant growth and development.

Land preparation ensures that there is sufficient water, heat, oxygen, and other important soil nutrients. This process will allow the soil to be more compressible to allow the penetration of the roots.

This includes ease of access to relevant infrastructure. These infrastructures may include electricity, good road network airports to allow ease of moving farm inputs and produce

The farm should be well secured from thieves, stray animals, rodents and other disease-causing organisms

Labor is very critical when doing preparation for drip irrigation this may include skilled or non-skilled these go along with the culture of a specific community in and around the farm.
Labour is a major component of production and its cost determine the success or failure of your enterprise

Nitrogen is the driver and many crops just don’t get enough because of an over-estimation of what the slurry can provide. Maize requires:

Ideally, the application of nitrogen should be split with 75% in the seedbed and the remaining 25% applied at the 1-3 leaf stage. This will help the crop get through its yellow phase often seen at emergence.

Although maize is a relatively pest-free crop to grow, the removal of these treatments may have an impact in the future.

Insecticide dressings can be applied at drilling/planting and there is a fungicide dressing to prevent rotting of the newly drilled seed.

These dressings break down after 21 days so there can be a risk where there is slow emergence of seed in cold, wet seed-beds.